- June 22, 2017
I walked gently to the basement door as I heard a curious cry. I was in my uncle’s house for the summer vacation. I carefully placed my hand on the door knob and opened it. I heard something hissing and  I was so frightened, “Could it be a snake?” I thought to myself. I felt like running away but I was too curious to give up.
I was as curious as a kitten. I took a step closer and it jumped out of the box. I quickly hopped backwards and closed my eyes, then I felt it spit on my leg. Finally, I decided to open my eyes and I saw a small creature. It was furry and white then when I knew it would not attack. I took two steps closer and realized it was a cat. I was scared of cats but I noticed this was too small and cute to be harmful. I felt pity for the it and I gently took it into my arms. It was a new born kitten. I guessed it was hunger so I went to the kitchen, got some milk and fed it. I quietly took it to my room and made a bed for it. It fell asleep immediately I placed it there.
When my uncle came, I told him of my unexpected visitor. He listened to my encounter and also fell in love with it. I asked if I could keep it. He thought for awhile but agreed when he saw the cute and innocent kitten. He looked at it and declared it was a female, I was so happy. I named her snow and cared so much for her.


I was so happy I found a new friend and partner, my unexpected gift. 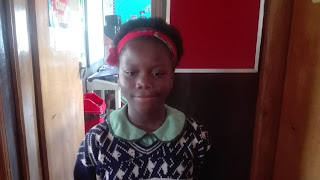