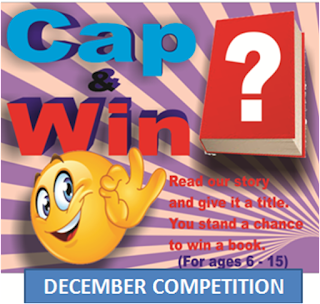 It was a windy day, the trees were dancing, papers were flying and it seemed as if they were all dancing to the rhythm of music. I was stuck inside watching my environment from my room’s window. Though I could go outside and play, but my mummy told me to stay inside my room for being a nuisance to her earlier that day.

Soon after, I noticed a short man in what seemed to be a green trench coat. I quickly turned my attention to him and what he was doing. He had a stern look and was stroking his beard as if he was giving a signal to someone. He saw me and stared at me with the scariest and most frightening look I have ever seen. Suddenly he pointed at me and I swiftly bent down below my window. When I looked up again, I saw him just at my window pressing his face on the glass. I bent down again and came up with a base ball bat but he was nowhere to be found.

As the popular saying goes “Curiosity killed the cat” that was the situation at hand. I ran out of the house and followed him as soon as I spotted him. I followed him into the abandoned duplex down the street. The paint of the duplex had peeled off; you could hardly recognize the original color. The flowers were dead and the gate was broken. Mum had told me it belonged to an old man who left the place and never came back. People called the place the haunted house and avoided it, but that day I was not afraid. I got closer and realized that some of the windows were broken and others missing.

As I stepped into the sitting room, I noticed something strange; there were blood stains all over the room; on the wall, chair and the floor. I saw the stair case and I wanted to know where it leads to. I climbed up and saw a hallway with different rooms, to my left was the kitchen and on a table I saw a knife with dry blood. Then something caught my eyes. It was the handwriting on the wall “YOU ARE NEXT” I ran out of the kitchen and ran down the stairs as fast as my short legs could take me. I finally saw the front door open, but as I was about to go out, the door was slammed shut. I heard a voice saying “Where do you think you are going?” I turned and tried to look for another exit. All of a sudden I was face to face with the man I saw earlier with the same coat. He opened his hood and I saw that an eye was missing; he was wearing an eye patch.  He brought out a pen knife from his pocket and was walking towards me. I backed away slowly not turning my back either. Suddenly I decided to run upstairs. I went into a room and I saw a broken window and shattered glass all over the ground. I summoned `enough courage to jump out of the window, not knowing the guy was already waiting downstairs for me. As I jumped blindly, I fell into his arms. He brought out the same knife and was about to stab me. Then I heard my name, “Chidi! Chidi! Chidi! Wake up! It was my mum’s voice and I was on my bed. I was so relieved but I narrated everything to my mum.