Showing posts from June, 2020
Show All

OUR STORY, OUR PRIDE 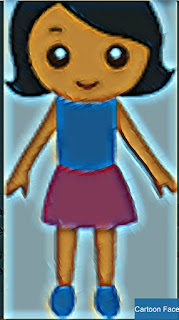 The Prize of being Rude.

For everything in life, there is always a prize to pay, especially when we are rude. There was a nine years old girl who bore the name Ngozi and lived in Opopo village. She was smart and beautiful. However, everybody hated her because of her rude and naughty behaviour. Her mother and father treated her like a princess being the only surviving child of her parent. She felt so proud and she will always make her friends do her house chores and will not even say thank you to them.
When her parents heard that people were talking bad about their family. They sat their daughter down and tried to talk to her but Ngozi refused to listen.

One morning, she woke up screaming and her parents quickly rushed to her room. They asked what was wrong and she said in a stammering voice that she had a dream about an old woman who tried to kill her by laying a curse on her. Her parents did not understand her but consoled her.That afternoon, Ngozi went to visit her friend. On her way,…
2 comments
Read more

OUR STORY, OUR PRIDE 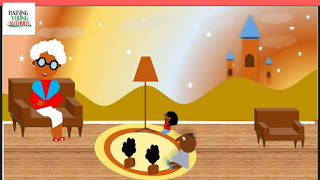 Many year ago, there lived a wise rabbit and his friend the old fox. The two friends lived in the forest with other animals. Rabbit was friendly and also loved to help others whenever they were in need but the fox was different. He was greedy and enjoyed cheating others to have more for himself. The other animals wondered how these two worked together and were friends. A few years later, there was famine in the land, and the fox who was left in abject poverty by his parents was really hungry. Other animals stocked up food in their houses while the fox had none.   Grumble!!! Went the sound of fox’s belly. “I can’t take it anymore. Hunger will finish me here. I must do something”. Fox thought.  “Aha! I know what I will do” Fox just had an idea. “Everyone in this village, anyone who has ears should listen. Come to my house with your foodstuffs and I will multiply them for you.” All the animals big and small gave the fox their foodstuff. Little did they know that their food was being eaten b…
2 comments
Read more 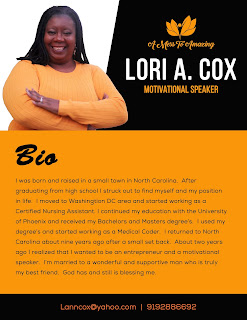 She was born and raised in a small town in North Carolina. After graduating from high school, she was struck out to find herself and position in life. She moved to Washington DC area and started working as a certified Nursing Assistant, she continued her education with the university of Phoenix and received her Bachelors and Masters degrees. She used her degrees and started working as a Medical coder. Lori Cox returned to North Carolina about nine years ago after a small set back. About two years later, she realized that she wanted to be an entrepreneur and a speaker. She is married to a wonderful and supportive man, who is truly her best friend.
Lori Cox is the owner of EL Organic Products and participates in National Hair Expo in Atlantic city. She co-authored “How Divorce became my deliverance”, “Friends That Pray” and “Jesus Expectation for his Daughters”.
She is the author of ‘Overcoming’. Lori spoke at Women Conferences on ‘How to Overcome’. Lori loves reading, writing and helpin…
Post a comment
Read more
More posts